The LGC invited Canadian former Guantánamo child prisoner Omar Khadr's lawyer Dennis Edney QC to the UK for a speaking tour to raise awareness about his client who remains in prison in Canada on 12-20 March 2014. One of the organisers, Val Brown, attended all the tour engagements in London.


by Val Brown, London Guantánamo Campaign
Saturday 8 March 2014
Although the speaking tour started on 12 March, Dennis Edney arrived in London on the previous Saturday. I met him for a coffee and although he was tired from his long trip, we had an interesting conversation about Omar Khadr and discussed the itinerary for his speaking tour. 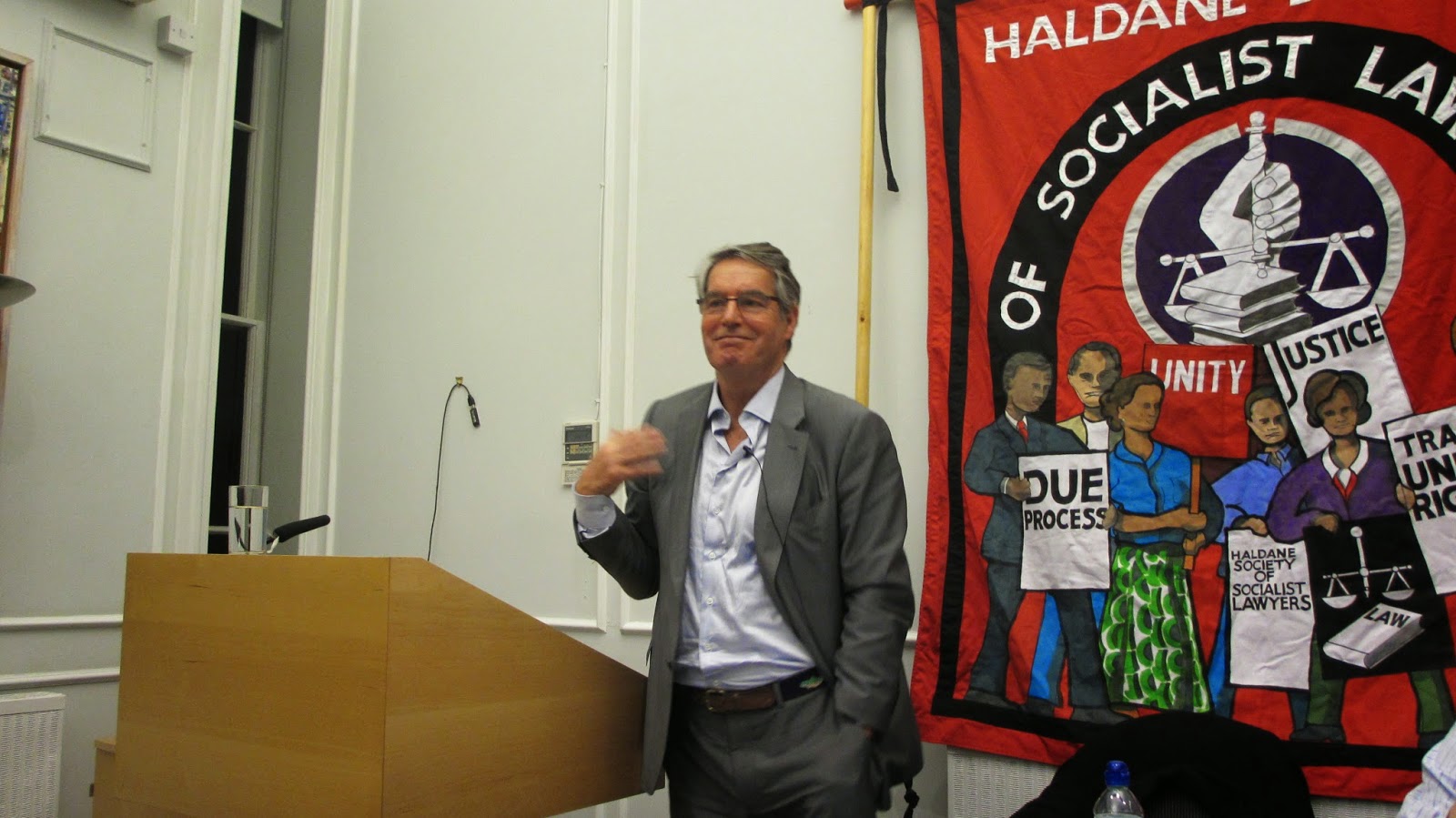 Dennis’ first speaking engagement as part of the tour was at Garden Court Chambers in Lincoln's Inn Fields. He gave a talk, Omar Khadr and the Betrayal of International Law, at a public meeting, chaired by Professor Bill Bowring, jointly organised by us, the Campaign against Criminalising Communities (CAMPACC),  and the Haldane Society of Socialist Lawyers. He spoke to an audience of lawyers and others in the  legal profession. His first talk was a very powerful and heartfelt speech on the destruction of law, justice and civil liberties under the “War on Terror” and set the tone for the rest of the tour.

Dennis proved himself to be a real trooper as he was already beginning to feel unwell and suffering from a sore throat.
Photographs by Richard Keith Wolff: http://www.demotix.com/news/4173143/dennis-edney-canadian-lawyer-gives-talk-haldane-society

Thursday 13 March 2014
Dennis spent the day in York where he gave a talk entitled Defending Guantánamo's youngest prisoner: The struggle to Free Omar Khadr at the University of York organised by the Centre for Applied Human Rights. I did not attend this event and the LGC does not have any footage of this event. 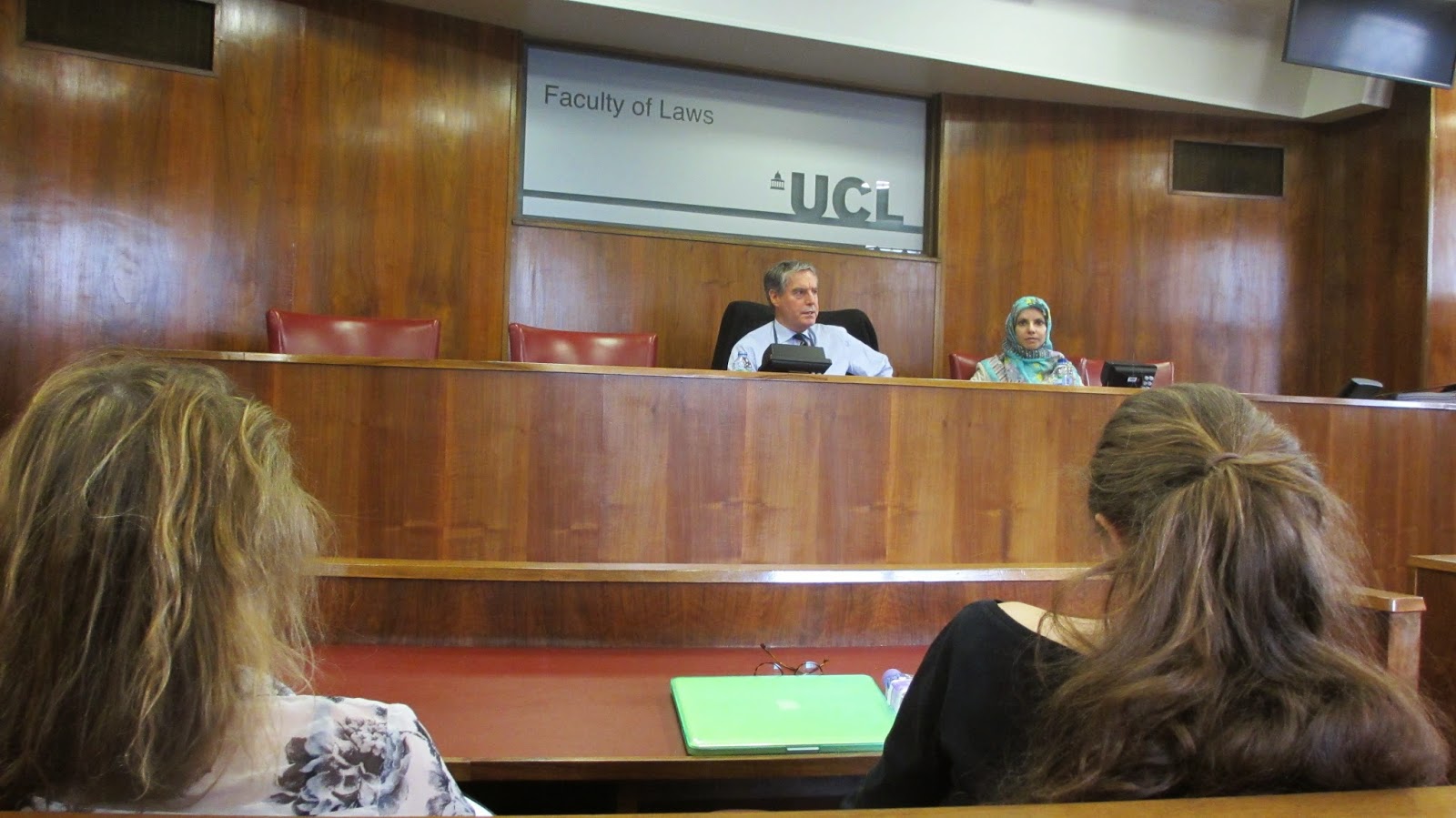 At lunchtime, the University College London Faculty of Laws held An audience with Dennis Edney QC. Dr Douglas Guilfoyle from the law school was unable to attend and one of my colleagues chaired the meeting instead.
The talk was aimed at university students. It was well received with a very interesting Q & A at the end. Unfortunately the video recording does not include the end of the meeting.

Again, aimed at (law) students, this talk was well received by all who attended.

Monday 17 March
We gave Dennis the weekend off and were ready to go again on Monday afternoon. There were two events on this day as well:
2.00-4.00pm
In the afternoon, a coalition of student societies at Birkbeck College, University of London, organised a talk Omar Khadr: Guantánamo's Child: A Travesty of Justice
Dennis was unfortunately rather unwell by this time and taking medication for chest and throat infections; however, this did not stop him from giving it his all at this talk.

7.00-8.30pm
In the evening, Dennis Edney talked about Omar Khadr at a meeting organised  by Veterans for Peace UK to a capacity audience at Housmans Bookshop, near King's Cross. Dennis Edney spoke along with Ben Griffin, an ex-SAS soldier who served in both Afghanistan and Iraq. They discussed the torture and abuse of Omar and other prisoners and how torture has become “the norm” within all ranks of the coalition forces (UK,US & others).

A very good Q & A discussion followed with great input from the audience, after they had recovered from the shock everyone felt as they listened to Dennis and Ben talk not just about the abuse and torture inflicted on Omar (and others), but the ease with which normally decent people can be enticed and encouraged to carry out such atrocities.

Tuesday 18 March
The tour continued and there were a number of engagements on this day.

11.00am – 1.00pm
Dennis was supposed to speak at a meeting at the London School of Economics organised by the student union.
Unfortunately, he was not well enough to attend and so I gave an informal talk about Omar before a showing of the film of Omar Khadr's interrogation by the Canadian intelligence services (CSIS) at Guantánamo in February 2003 You don't Like the Truth 4 days Inside Guantánamo.


This was followed by a Q & A. Some of the students who attended were visibly shaken by the film as they could empathise with Omar and the pain he went through.

4.30-5.30pm
In the afternoon the Queen Mary’s University Amnesty society held a meeting about Omar Khadr. Dennis was able to attend this event and spoke to an audience of mainly young students who listened in disbelief to the horrors inflicted on Omar and asked many questions of how it could happen and what they could do to stop it happening to others.

7.00-9.00pm
In the evening, Amnesty International UK organised an event, Defending Guantánamo's Youngest Prisoner, where Dennis was joined by Aaf Post from the Free Omar Khadr Now campaign and Andy Worthington, journalist and author of The Guantánamo Files.

Aaf showed a presentation of how she first learnt about Omar when the film You Don't Like the Truth was shown on television in the Netherlands where she is from, of her need to do something and the creation of the global Free Omar Khadr Now campaign, how it has now become the official campaign website for Omar, and the work being done to help Dennis win Omar's freedom.

Dennis spoke of his legal journey to free Omar and Andy spoke about his investigative journalism to bring the world’s attention to Guantánamo and the War OF Terror.
It was a very intense evening which had the audience of 60+ spellbound in disbelief that the world has lost its way regarding justice and human rights.
As the event was organised by Amnesty, no filming took place.

Afterwards, Dennis, Andy, Aaf and me went for a quiet meal where we had an interesting discussion about Omar and the rule of law.

Thursday 20 March 7.30-9.00pm
The final meeting to end the tour was a Q & A with Dennis Edney organised by the local Amnesty group in St. John's Wood, north London. The tour ended on a high and I can do no better than share my colleague Noel Hamel's account of the final event of what was a very enlightening and successful tour:
Noel Hamel: “At St John's Wood we had barely started with about 15 people when others appeared at the doors - then, they just kept coming!
It seems that a couple of local secondary school teachers had told their classes about the event and EVERYONE decided to come.
Extra chairs and doors opened into a second room but still it was standing room only. I was exhausted though Dennis did all the talking of course.
As an armchair socialist I could read and regurgitate but from Dennis it is the real thing. They may not realise it but those school kids were amongst the luckiest on the planet.  Dennis was of course terrific and the style of his delivery gave the story enormous impact. Even though I have heard him tell the stories several times I still find it emotionally draining to realise the gratuitous and deliberate cruelty of Guantánamo and its processes.”

Posted by London Guantánamo Campaign at 9:18 AM