Book Review: TORTURE: DOES IT WORK?

TORTURE: DOES IT WORK?
INTERROGATION ISSUES AND EFFECTIVENESS IN THE GLOBAL WAR ON TERROR

YVONNE RIDLEY.  ISBN 978-1-78266-830-5
Yvonne Ridley’s book is an extremely competent and well researched interrogation of its title question. Yet, is there ambiguity in the word “work”?  Does torture have a purpose? Is it for interrogation? Or is it for sadistic satisfaction, for revenge, to intimidate and to spread fear? Even if it "works" for any of the latter, does it actually produce intelligence? 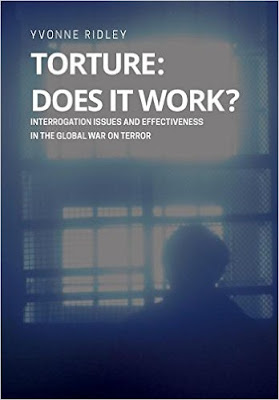 Torture is ancient but it was outlawed after 1945 by ‘civilised societies’ sickened by the Japanese and Nazis. Many states queued up to sign-on but still torture now. Prominent signatory states went ‘underground’ whilst denying they torture. The 9/11 attacks caught the lame rookie president, George Bush, off-balance. To ‘restore’ the image of the presidency, draconian revenge stunts were planned embracing wars and high profile torture. Totally innocent people were seized to appease US electorate expectations of decisive action. 5000 were detained, justified by concocted personalised ‘terrorism’ myths. Under instruction to “soften up” prisoners, armed forces and ‘intelligence’ agents were emboldened to abuse, torture, injure and humiliate victims in every way possible. Lawyers devised inventive justifications for torture, pretending it was legal and legitimate. The UK fawningly colluded and has expensively ‘bought-off’ legal challenges, avoiding scrutiny. But why do it at all? Revenge and propaganda were motivations but is there more?
For years the USA invested millions of dollars in training torturers. Now they were employed for “Enhanced Interrogation Techniques” - torture redefined by lawyers. ‘Professional’ torture was overseen by medical professionals to avoid permanent injury but even so boundaries were stretched. Below the radar servicemen and women tortured and abused without restraint. Death and injury were not uncommon. Other torturers worked secretively at ‘black’ sites and in states where torture is routine. Victims were secretly flown round the globe with covert international cooperation. Guantánamo was an artificial extralegal construct where ‘anything goes’.
If the intent was intelligence gathering from victims, since most clearly lacked any useful information, torturing for intelligence was futile. Under torture false admissions are common. ‘Admissions’ about other people come easily compared to anything personally incriminating. The torturers filed third party stories as if they were evidence. Torturers were obsessed with Osama bin Laden’s whereabouts but got nowhere. He was found by basic surveillance. Torture advocates cite the “ticking time bomb” justification; thwarting a devastating attack in the nick of time by extracting, through torture, information to disable a bomb; but that didn’t remotely resemble any US torture scenario.
Ibn Sheikh al-Libi was shunted between sites and gruesomely tortured, particularly in Cairo. He invented stories about a ricin plot in London, Saddam Hussein working with Osama bin Laden and weapons of mass destruction shared with terrorists – justification for the Iraq war – to get some relief. Abu Zubaydah and Khalid Sheikh Mohammed were intensively tortured by Bush approved CIA techniques. Both invented far-fetched terror plots, keeping agents busily checking to forestall possible attacks. The announced discovery of the ‘dirty bomb plot’ by Attorney General John Ashcroft in 2002 is notorious. According to him CIA interrogation (torture) saved New Yorkers from devastating radiation exposure to be dispersed by an explosive device. Jose Padilla, held three and a half years in solitary confinement without due process, was cleared for lack of credible evidence. That and the London ricin plot were hoaxes.
Advocates of torture claim torture produces vital intelligence but say national security prevents disclosure. Yvonne interviewed victims who all say torture is futile, gratuitous barbarity. Add to that the self-inflicted image damage of barbarity and utter hypocrisy, the licence given to other states, corrupt governments, dictators, tyrants and terrorist groups. Torture by the USA and allies is a recipe for world-wide regression. Thanks a lot George Bush!
Anyone who thinks torture might possibly be a useful tool in warfare and to combat terrorism should read this well researched and considered book.

Purchase from Amazon
Posted by London Guantánamo Campaign at 11:38 AM