In a unanimous decision, a federal appeals court upheld the indefinite decision of Yemeni “forever prisoner” Abdulsalam Al Hela, 52, ruling that Guantánamo prisoners do not have due process rights. His defence argued that the “evidence against him relied on anonymous hearsay and that he never joined or supported Al Qaeda or any other terrorist group.”

This decision could affect the case of five prisoners accused of involvement in attacks on New York City in September 2001, who are currently awaiting trial, as it has long been held, since the 2008 ruling in Boumediene v Bush, that prisoners can only challenge their detention through habeas corpus. The decision can be appealed. Al Hela’s lawyer, David Remes said: "Due process is one of the most fundamental constitutional guarantees, and to rule that it simply does not apply to Guantanamo detainees contradicts those most fundamental values that the due process clause exists to protect”. 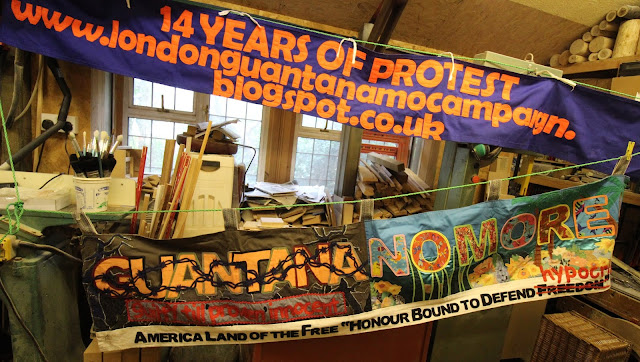 Colonel Stephen Keane has been appointed the new judge in the case of the five prisoners accused of involvement in attacks on New York City in September 2001 after the previous judge, the fourth in the case which is still at pre-trial stage after almost a decade, announced in March he was leaving the case to retire. “No hearings in the case have been held at Guantánamo since February, in part because of a complicated two-week quarantine requirement for newcomers to the base to safeguard its 6,000 residents. (Forty of them are prisoners and 1,500 of them are soldiers assigned to the wartime prison.)”.

One of his first orders has been to cancel all hearings in the case until next year, due to the restrictions, and delay the start of the trial until at least August 2021.

A federal appeals panel has refused to delay a court-ordered, independent medical examination of Saudi prisoner Mohammed Al-Qahtani, “to decide whether he should be repatriated to psychiatric care in Saudi Arabia.” “Justice Department lawyers have warned that the first use of a mixed medical commission — one doctor from the U.S. Army and two from a neutral country chosen by the International Red Cross and approved by the United States and Saudi Arabia — would be disruptive and unleash more requests by other prisoners.”

“Lawyers for Mr. Qahtani, and a psychiatrist who was consulted on the case, made a novel argument for enacting an Army regulation that includes medical-repatriation provisions of the Third Geneva Convention for prisoners of war. Their position is that Mr. Qahtani can only be effectively treated in his homeland.

"Most claims of torture of Guantánamo detainees center on what happened in the C.I.A. prison network before their transfer to military custody. But leaked documents show that Mr. Qahtani was subjected to two months of continuous, brutal interrogations at Guantánamo’s Camp X-Ray — sleep deprivation, dehydration, nudity and being menaced by dogs — while under the care of military medics from the same prison operation that provides his medical care now.”

In early September, the Trump administration announced sanctions against the chief prosecutor at the International Criminal Court (ICC), which is investigating alleged US war crimes in Afghanistan as part of an investigation into war crimes by all parties in that country. The US is not a member of the ICC and does not consider itself to be affected by it. Nonetheless, it has placed sanctions on Prosecutor Fatou Bensouda and the head of jurisdiction at the court Phakiso Mochochoko; they were added to the “Treasury Department's "Specially Designated Nationals" list. The designation freezes any assets they might have in the U.S. or subject to U.S. law.”  https://www.npr.org/2020/09/02/908896108/trump-administration-sanctions-icc-prosecutor-investigating-alleged-u-s-war-crim

Court documents in the case brought by the family of Harry Dunn, who was killed after his motorcycle was hit by the car of Anne Sacoolas, “wife of Jonathon Sacoolas, an operative for the CIA”, who was allowed to return to the US and avoid prosecution, have revealed that around 200 US personnel working in the UK have benefited from a bulk diplomatic immunity deal under the war on terror. Sacoolas claimed diplomatic immunity from prosecution, after she fatally hit Mr Dunn while driving the wrong way on the road, near RAF Croughton in Sussex. “The documents show that, in 1995, 2001, and 2006, Foreign and Commonwealth Office officials made a case to ministers to extend diplomatic immunity – including providing immunity from criminal prosecution – to an estimated 200 staff working at the RAF Croughton base in Sussex” and “The heavily-redacted documents include a ministerial submission from 2006 which identifies the base’s role in ‘war on terror’ operations as a reason for granting bulk immunity. This 2006 submission to ministers notes the “increased demands brought on by the global war on terrorism and the war in Iraq” and raises a concern that granting bulk diplomatic immunity to multiple US staff would provoke a “possible read-across by the media to rendition flights”.”

Controversial new legislation that will allow immunity from prosecution for British military personnel for potential war crimes, including torture, committed overseas passed its second reading in parliament. “The bill, which will end the right to bring legal cases against British soldiers for alleged offences that are more than five years old, has been criticised by senior military figures and human rights groups, who say it will damage Britain's reputation abroad and act as a "licence to torture".”

At the same time, the Conservative Party launched the covert human intelligence sources bill “allowing confidential informants working for MI5 and the police to break the law […] amid a row about whether committing crimes such as murder and torture should be explicitly banned”. 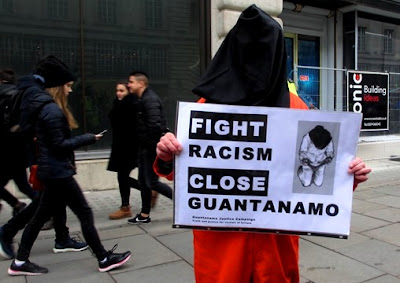 The LGC is saddened by the death of long-term activist John Lloyd who was a regular at our monthly demonstrations outside the US Embassy and at demonstrations organised by the Guantanamo Justice Campaigns and other organisations. He and his banners offering a poignant reminder of the wrongdoing of the US and UK governments will be very much missed.

The London Guantánamo Campaign’s monthly Shut Guantánamo! demonstrations continue online for the present at 12-2pm on the first Thursday of each month. To take part, please email a photo/video of your banner to us at london.gtmo@gmail.com or share your picture/video to our Facebook page https://www.facebook.com/London-Guantánamo-Campaign-114010671973111/ or via Twitter at that time.
Posted by London Guantánamo Campaign at 4:40 AM No comments:

A federal judge disallowed a US government appeal to extend the delay in seeking an independent medical review for Saudi prisoner Mohammed Al-Qahtani due to his delicate health situation, stating that the “risk of delay to the prisoner “far outweighs” any potential harm to the government from dispatching a team of doctors to evaluate him.”

Al-Qahtani, who suffers from schizophrenia, was tortured in secret CIA detention before arriving at Guantanamo and thus the US government is unlikely to want to have him meet independent doctors who can verify parts of his ordeal and order his release. His lawyers are seeking “a Mixed Medical Commission, consisting of one doctor chosen by the government and two others from neutral third countries, to confirm the health condition of the prisoner. and eventually secure his release to Saudi Arabia for treatment.” Saudi Arabia has agreed to have him return. He remains a "forever prisoner" at Guantánamo.

More scheduled pre-trial hearings and prisoner reviews set for October and November this year have been cancelled due to the coronavirus pandemic. 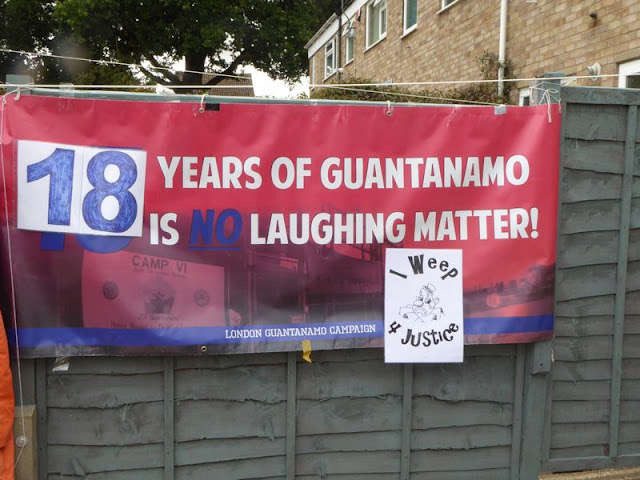 The CIA has unredacted parts of a memoir by a former high-profile counterterrorism official about the CIA’s torture program following the September 11, 2001 terrorist attacks. According to The New York Times, the intelligence agency has relented almost 10 years after blocking the release of much of the sensitive information in former FBI official Ali Soufan’s 2011 book The Black Banners: How Torture Derailed the War on Terror After 9/11. The book’s publisher, W.W. Norton, plans to next month print the original uncensored version, which paints a raw and highly skeptical first-person picture of the CIA’s torture program. According to the Times, the newly declassified bits include detailed information about the agency’s brutal interrogation techniques of now infamous detainees including Abu Zubaydah and Ramzi bin al-Shibh. 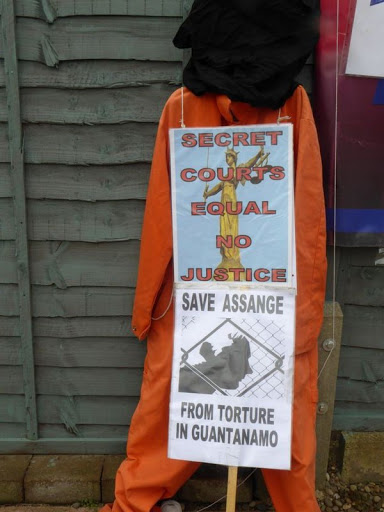 With the ongoing Covid-19 pandemic, the London Guantánamo Campaign’s monthly Shut Guantánamo! demonstration will be held virtually at 12-2pm on Thursday 3 September. To take part, please email a photo/video of your banner to us at london.gtmo@gmail.com before 12pm on 3 September or share your picture/video to our Facebook page https://www.facebook.com/London-Guantánamo-Campaign-114010671973111/ or via Twitter (or just a message – some possible messages available through the link below) @shutguantanamo between 12 and 2pm on Thursday 3 September. More details here: https://www.facebook.com/events/792008441567984/

Posted by London Guantánamo Campaign at 5:33 AM No comments:

In response to the Covid19 pandemic, our next monthly Shut Guántanamo! demonstration (now in its fourteeenth year) is a virtual event on Thursday 3 September at 12-2pm from wherever you are. Please join us online by email or social media(Facebook/Twitter): more details at https://www.facebook.com/events/792008441567984/

The London Guantánamo Campaign turned 10 on 16 March 2016. You can read a brief illustrated history of our campaign over the past 10 years here: https://onesmallwindow.wordpress.com/2016/01/03/the-london-guantanamo-campaign-the-bush-years-2006-2009/ (Bush administration) and https://onesmallwindow.wordpress.com/2016/03/10/the-london-guantanamo-campaign-the-obama-years-2009-2016/ (Obama administration)