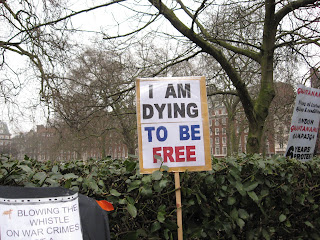 Today is International Day in Solidarity with the California Hunger Strikers and for Justice for Trayvon Martin. The Guantánamo Bay hunger strike will soon enter its sixth month and other campaigns supported by the LGC also involve hunger strikers, so we ask you to take action. (1) and (2) - please join the actions in London today and tomorrow & (3) and (4) please take part in the petition-signing/letter-writing campaigns. Hunger strikes are an extreme form of peaceful protest  with potentially fatal consequences. Please take what action you can to support the peaceful and lawful demands of abused prisoners.

An article by Aisha Maniar from the London Guantánamo Campaign about why the California hunger strike should matter to Guantánamo Bay activists. For the connections, issues and background: http://onesmallwindow.wordpress.com/2013/07/29/guantanamo-baypelican-bay-uss-prisoners-strike-for-justice/

On day 24 of the California Prisoner Hunger Strike and Work Strike launched by 30,000 prisoners, communities across the US will fast and hold events in solidarity with the hunger strikers and their 5 core demands, and for Justice for Trayvon Martin.  Action is more urgent every day -- one of the hunger strikers, 32-year-old Billy Guero Sell, has already died, after being refused medical help.  People around the world have committed to fast today, for 24 hours if they can, and take other action in solidarity.

Worldwide, more than 1000 individuals and organisations, including US celebrities have pledged to support the “Hunger for Justice” campaign in support of the California prisoners.

Join us at 12-1pm outside the US Embassy and 1.15-2.15pm outside Speaker’s Corner, Hyde Park, opposite Marble Arch, to call for the closure of Guantánamo and other prisons like this.
Prisoners in California have also been on a mass hunger strike since 8 July against the practice of prolonged solitary confinement, sometimes of decades, which many consider to be a form of torture. This month’s demonstration will be in solidarity with both prisoner hunger strikes.

---------
3: Take action for Shawki Omar:
The family of Shawki Omar, a Palestinian-American held in jail on spurious charges for the past 8 1/2 years in Iraq have joined the LGC’s protests outside the US Embassy on a number of occasions, and have held their own too. Mr Omar has been on hunger strike against increasing abuses in Iraqi jails since February this year. The Iraqis have no plans to release him even though he has been held for longer than his alleged sentence. In June, our monthly demonstration was held in solidarity with his case.
Please write to the Iraqi and US authorities and demand actions. Find out more here:
https://onesmallwindow.wordpress.com/2013/06/13/starved-of-justice-in-iraq-american-prisoner-on-hunger-strike/

-----------
4: Take action for Ali Aarrass:
From Amnesty International: Ali Aarrass, a dual Belgian-Moroccan national detained in Salé II prison near Rabat, Morocco, is on a “dry” hunger strike (refusing water in addition to food) to protest ill-treatment at the hands of the prison authorities. He is reportedly in a critical condition, still conscious but unable to stand and struggling to speak. Today is day 22 of his hunger strike.
Find out more about his case and take action for this hunger-striking victim of torture here: http://www.amnesty.org/en/library/asset/MDE29/008/2013/en/93d05968-e56d-45cf-96e8-00c58670eb07/mde290082013en.html
And sign the petition to support him:
http://www.avaaz.org/en/petition/Release_Ali_Aarass/?tUyhPab
Posted by London Guantánamo Campaign at 6:55 AM