Report: Global Day of Action to Close Guantánamo: Not Another Day in Guantánamo demonstration in London 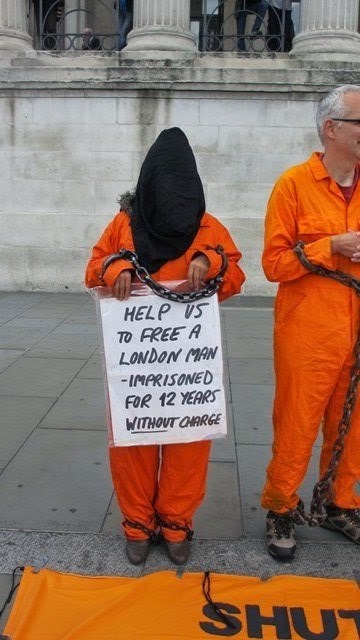 On 23 May 2013, Barack Obama made the latest in a long line of high-profile broken promises to close Guantánamo Bay. During his speech on national security, Obama conceded that the original premise for opening Guantánamo “was found unconstitutional five years ago”, and “that [it] flouts the rule of law,” as well as that it costs the US taxpayer over $1 million a year to keep each prisoner there. These are not convicted prisoners: they are 154 men who have been held for over 12 years, almost all without charge or trial, as hostages of the US administration. 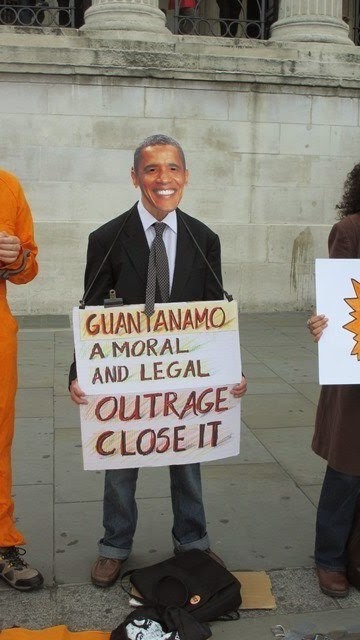 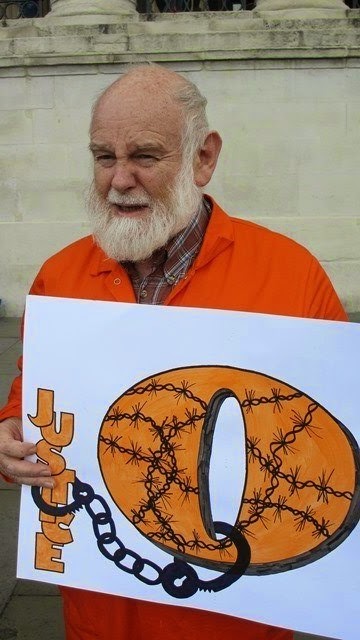 Barack Obama made his latest pledge at the height of media coverage of an on-going hunger strike at Guantánamo Bay. Over the past year, he has released 11 prisoners including former British resident Ahmed Belbacha to Algeria, reinstated the envoy to work on the closure of Guantánamo he dismissed just days before the mass hunger strike broke out in February 2013, restarted status reviews of prisoners detained indefinitely and lifted a moratorium on returning prisoners to Yemen he imposed in 2010. This is slow progress, and the fact that no Yemenis have been repatriated, even though they make up the largest single nationality and the largest number cleared for release, shows there is little intention to close Guantánamo and end indefinite detention there.

That may be good enough for the Obama administration, but it is yet another blow for the prisoners. With minimal progress and a lack of political will to close Guantánamo, and little mainstream media coverage of their plight, human rights organisations and activists around the world decided to remind Barack Obama of his latest broken promise on its anniversary. More than 45 actions were held worldwide in 9 countries on this day. 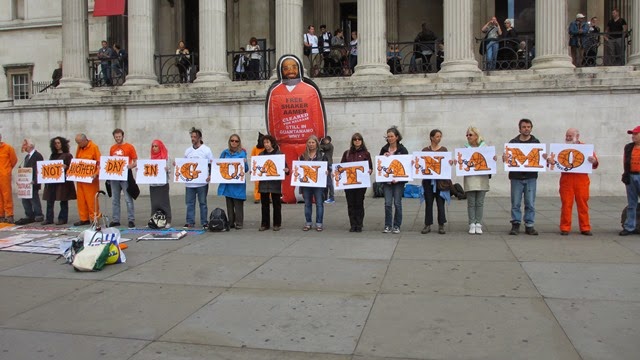 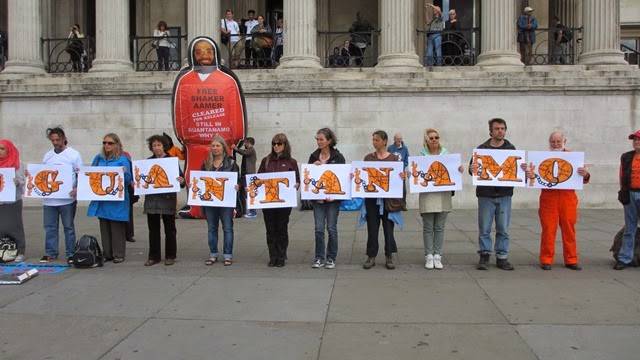 In London, over 70 people joined a lunchtime demonstration we organised in Trafalgar Square to call for Barack Obama to make good on his promise to close Guantánamo and to remind both the British and US governments that British resident Shaker Aamer remains there. Activists, some wearing orange jumpsuits and black hoods, held up placards made by the LGC’s Noel Hamel that read “Not Another Day in Guantánamo” with the word “justice” chained to each letter of the name of the prison camp. Activists from Peace Strike brought along an inflatable larger-than-life Shaker Aamer to draw awareness to his plight outside the National Gallery. The silent protest drew a lot of interest from the public, leaflets were handed out and activists spoke to passers-by. With hardly any coverage in the mainstream media of Guantánamo Bay, Shaker Aamer or the hunger strike, now in its 16th month, many people were not aware that it was still open, let alone the various abuses and torture that continue there. 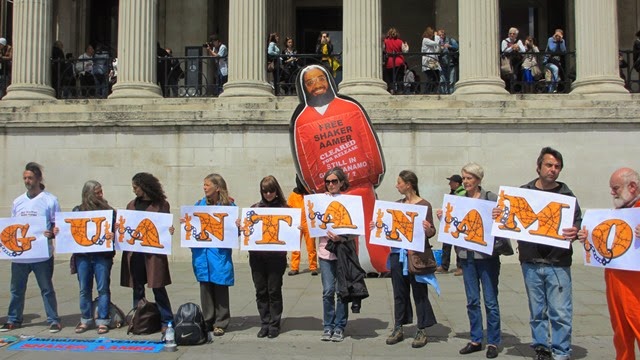 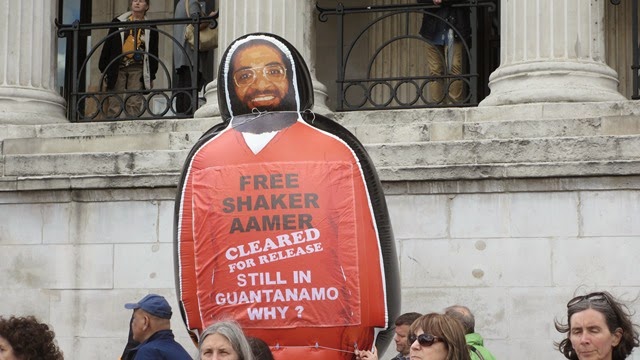 The action was supported by many organisations including Veterans for Peace UK, the Save Shaker Aamer Campaign, Peace Strike, local Amnesty International groups, the Quakers, Friends of Chelsea Manning and Julian Assange, Occupy and Kingston Peace Council. The LGC thanks everyone who joined us.

The campaign to close Guantánamo goes on, and we cannot do it without YOU!  Thousands of people worldwide took action on 23 May but with political and media inaction, the general public has to give Barack Obama every reason to show us a change WE can believe in by closing Guantánamo and ending the lawless regime it has created.

The LGC had the following letter published in The Guardian newspaper on 23 May: http://www.theguardian.com/world/2014/may/22/america-obama-guantanamo-bay
“On 23 May 2013, President Barack Obama made the last major speech in which he again pledged to close Guantánamo Bay. His many pledges on the matter remain purely rhetorical. On Friday, human rights activists and organisations will take part in a global day of protest in more than 40 cities in nine countries to remind Obama of his broken pledge. In London, we will hold a public demonstration in Trafalgar Square from 12pm to 2pm. 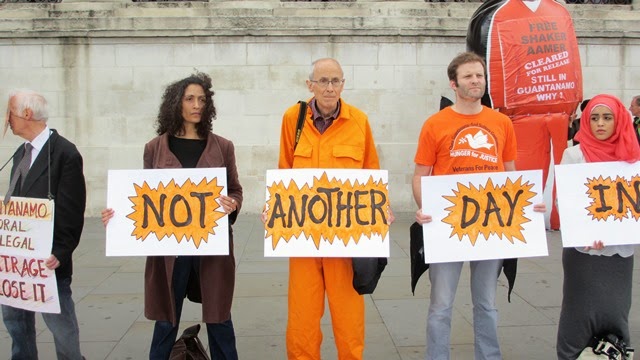 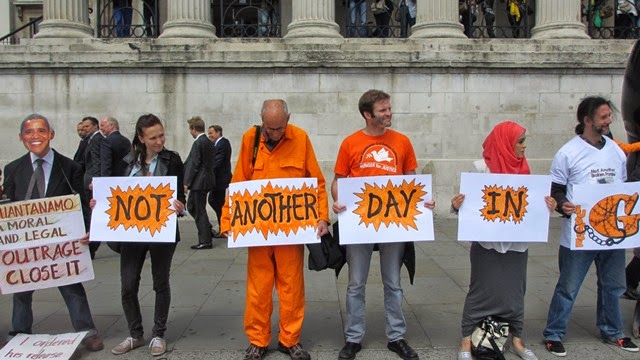 Report on global actions (40+ in 7 countries): http://onesmallwindow.wordpress.com/2014/05/27/no-more-broken-promises-global-day-of-action-to-close-guantanamo/
Posted by London Guantánamo Campaign at 11:06 AM