On Twelfth Anniversary of Guantánamo Bay, London says “Shut it Down!” 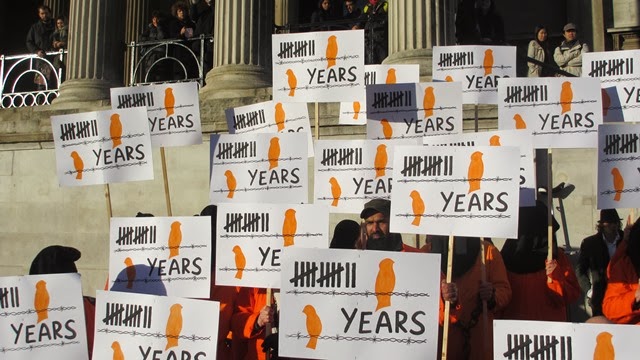 More than 250 people from across England joined a demonstration on Saturday 11 January outside the National Gallery in Trafalgar Square to mark the twelfth anniversary of the opening of the extralegal prison camp at Guantánamo Bay and to call for its closure.

After 12 years, 155 prisoners remain held there, almost wholly without charge or trial, and many have been engaged for almost one year in a hunger strike against their ongoing arbitrary detention and conditions of detention. The hunger strike has prompted Obama to remember his broken promise to close the prison in 2009, yet his recent actions remain half-hearted and insincere. Most of the nine prisoners he released in December 2013 – to Algeria and Slovakia – remain in a precarious situation and the periodic reviews of prisoner status are progressing slowly; these could see prisoners held indefinitely cleared for release. Barack Obama could show real commitment to closing Guantánamo by immediately releasing Shaker Aamer to the UK, a country the US has a “special relationship” with, and the over 50 Yemeni prisoners who have been cleared for release for years. Yemenis make up the largest nationality at Guantánamo Bay. Obama placed a moratorium on returns there in 2010 preventing the release of prisoners; although he lifted this in May 2013, not a single Yemeni has been returned home. 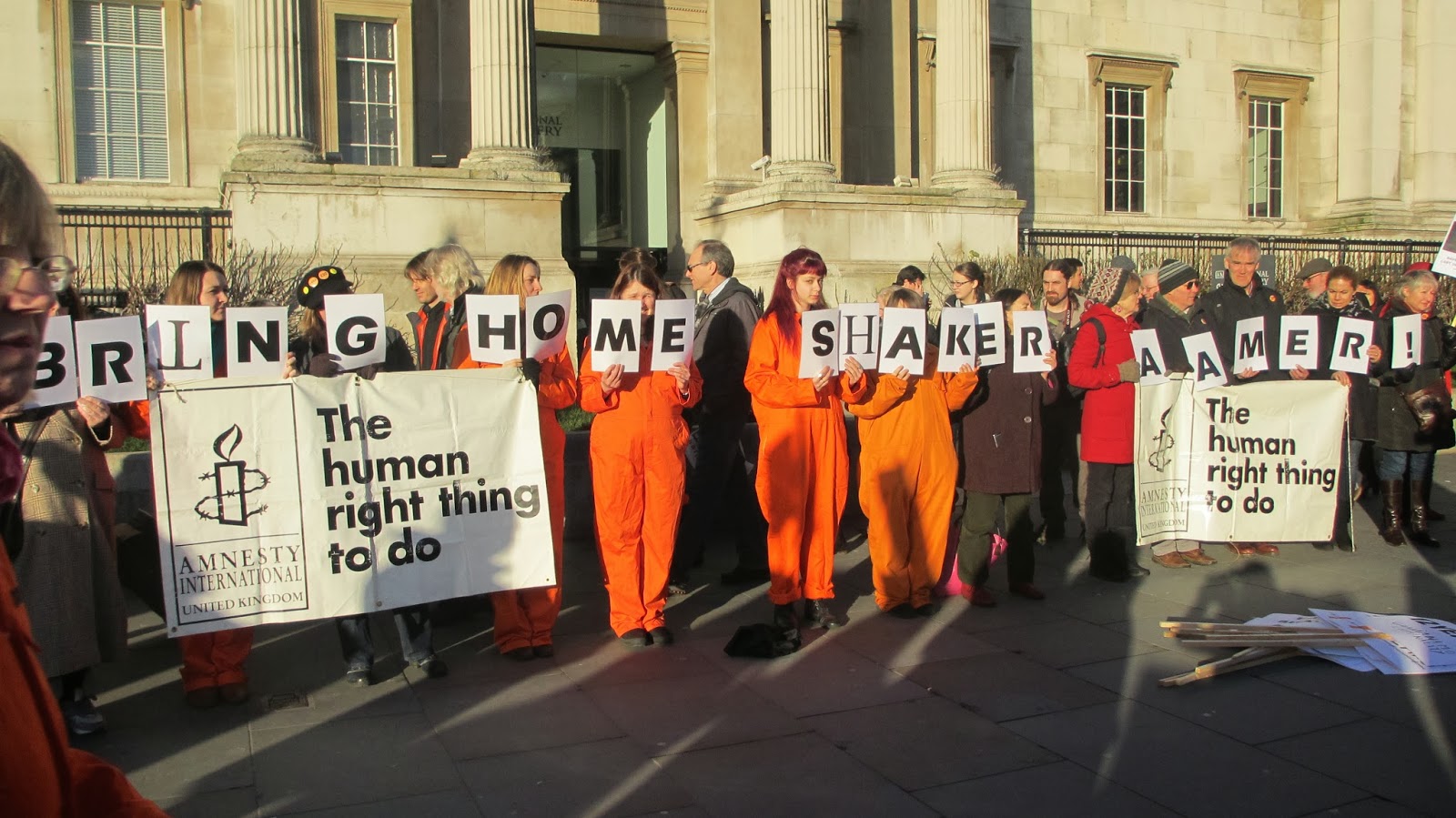 The demonstration started with a photo shoot, creating a wall of banners with a bright orange motif outside the National Gallery to highlight the ludicrous fact that this legal anomaly has existed for 12 years and continues to function with the blessing of the international community and the powers that be worldwide.

The demonstration brought together politicians and activists against the prison camp. Speakers at the demonstration included politicians MP Jeremy Corbyn (Labour: Islington North), Tony Clarke (Green Party) and Sarah Ludford MEP (Liberal Democrat: London) and activists from NGOs such as Katie Taylor from Reprieve, who read out a statement by their client Shaker Aamer, and Noa Kleinman from Amnesty International. The LGC, a grassroots campaign, was joined by speakers from some of the grassroots organisations it works with, such as Ben Griffin from Veterans for Peace UK, Lindi Carter from WISE Up for Chelsea Manning and Joy Hurcombe from the Save Shaker Aamer Campaign, as well as solicitor Louise Christian, who represented 4 British nationals held at Guantánamo Bay and Yemeni peace activist Muna Othman. 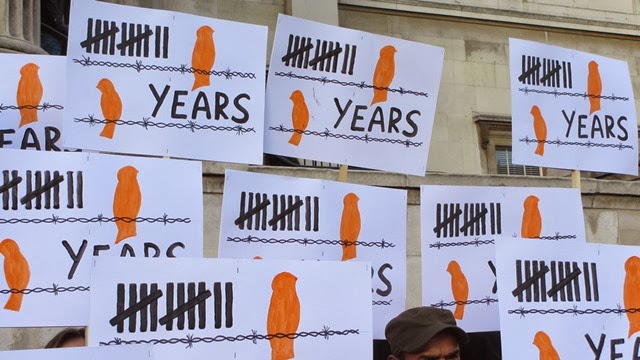 Before the end of the demonstration, Aisha Maniar and Val Brown read out messages of support from Norman Baker MP and Jean Lambert MEP, which can be read below. Val Brown also read out a message of support from former prisoner Omar Khadr.

The LGC supports all victims of injustice and campaigns against illegal prisons and torture elsewhere, particularly in Afghanistan and Iraq. The demonstration was joined by the wife and daughter of Shawki Ahmed Omar, an American-Jordanian who was arrested in Iraq in 2004 along with his wife, who is Iraqi, and has been subject to torture at Camp Nama, Abu Ghraib and elsewhere; he was convicted in 2010 in an unfair trial and the Iraqi authorities last year told his family he will not be released when he has finished his sentence. His 8-year old daughter Zainab, who has never met her father, spoke courageously about how much she would like to meet him. You can read about his shocking story here:
http://onesmallwindow.wordpress.com/2013/06/13/starved-of-justice-in-iraq-american-prisoner-on-hunger-strike/
http://truth-out.org/news/item/19220-nine-years-of-injustice-for-american-prisoner-in-iraq
A message by his wife Narmeen Saleh was read out by Aisha Maniar. The text is below.
In November 2013, Amnesty International launched an urgent action for him: http://amnesty.org/en/library/asset/MDE14/018/2013/en/be34033a-049b-4e82-a281-f94957fa852b/mde140182013en.html 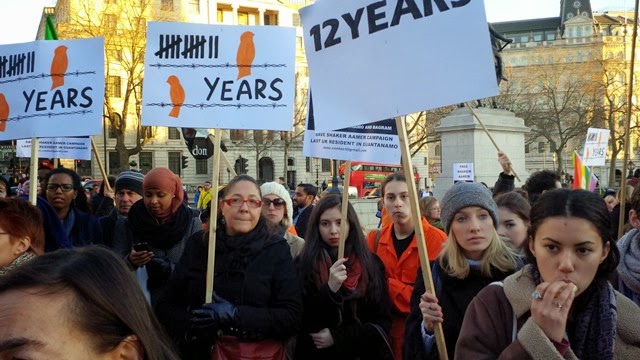 A cold but sunny afternoon, a wide range of people joined to show their solidarity, and outside the National Gallery, the LGC also had a display of artwork by some of the prisoners, as well as plenty of chanting calling for Guantánamo to close. The response from passers-by was largely positive and supportive. Many tourists visiting London expressed their solidarity. Given the almost blanket lack of coverage in the media, many people did not know it was the anniversary. 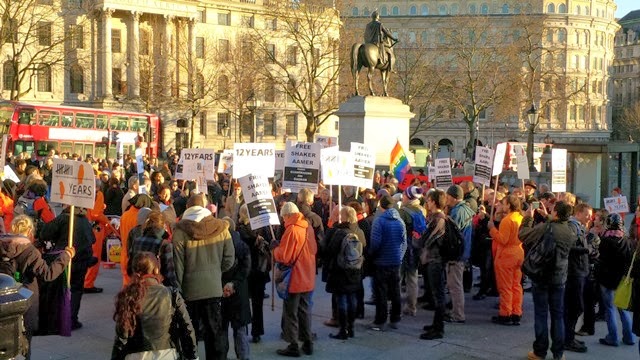 The London Guantánamo Campaign thanks the wonderful people who were involved in organising the event, our speakers for their work for Guantánamo prisoners, and the excellent people who joined us, including the 25 who travelled from Brighton, the handful from Peterborough and activists from Yorkshire. 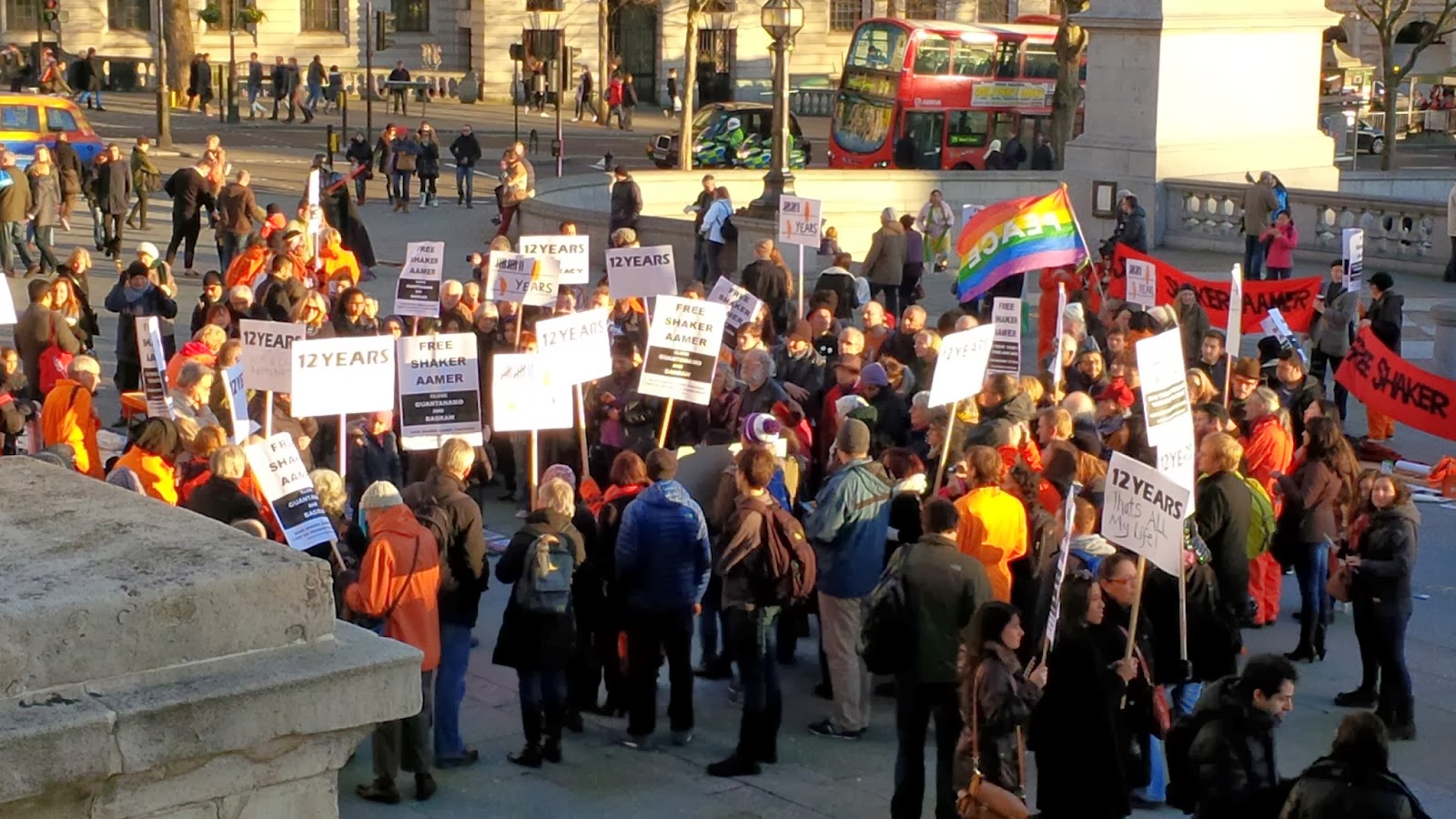 For videos from the day, including Katie Taylor from Reprieve reading Shaker Aamer’s statement, please visit our YouTube page.

Statement by Jean Lambert MEP:
I'm very sorry I cannot be with you today, but I am in Athens speaking on the health-care crisis in Greece - another avoidable tragedy. 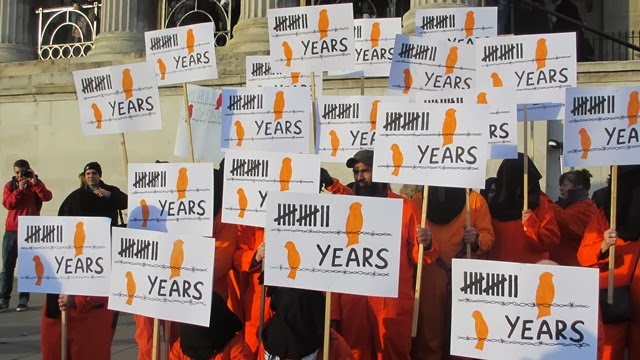 This is the 12th year of the existence of Guantanamo. Every year, we mark the anniversary hoping it will be the last time. Hoping that those still detained there will be released or charged and that those charged will be tried in a public, civil court where all the evidence can be heard and tested.

The fact that Guantanamo remains open is a stain on the human rights record of the United States. President Obama must fulfil his pledge to close the camp.

I welcome the recent, small progress. I welcome the decision of the Slovakian Government to take 3 Uighur detainees and wish more EU governments would take such action, as the European Parliament has repeatedly demanded.

The UK still has to bring Shaker Aamer home to his family in London. I still cannot understand why this has not happened - he has been cleared for transfer, he has not been charged - he should be here with those who love him.
Today's demonstration is important. It shows that those held in Guantanamo are not forgotten and that there are people who believe that international law must be upheld and that human rights must be respected. Guantanamo must close. 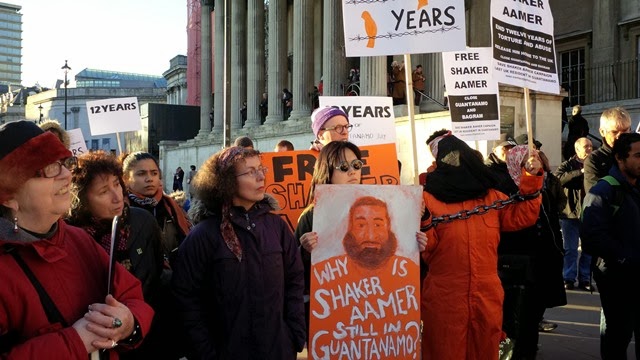 Norman Baker MP (courtesy of Sara Birch, Brighton Amnesty):
It is deeply disappointing that Guantánamo Bay remains open, and that large numbers of individuals have been held for years without any proper legal justification, without charge and without trial. Naturally we in the UK are particularly concerned about the continued detention of Shaker Aamer, a concern only heightened by the state of his health.

As a government minister I can vouch for the fact that our Foreign Office has actively and repeatedly raised the matter with the US authorities but sadly without success.

I congratulate Amnesty and all the many individuals across the party and of no party who keep the spotlight on this case, and call upon Barack Obama, not just to release Shaker Aamer, but to honour his commitment to close Guantánamo Bay and remove this stain from the United States.


Shawki Ahmed Omar is an American citizen who has been unjustly detained in the jails of Iraq for nine years. He has never been allowed to see a lawyer or discuss his case. Furthermore, he is not allowed to contact his family.

Three months ago, we were informed by the Red Cross that my husband has been transferred to the infamous torture facility, Abu Ghraib. We hold our breaths everyday as we hear about inmates dying under torture in Abu Ghraib. 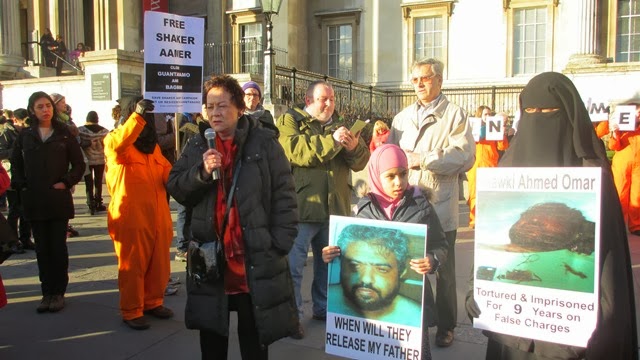 My husband had been on hunger strike for 6 months. As a result, he now vomits blood and suffers from many illnesses; yet, he is not even given the most basic medical care.

As we have no way of being reassured about his state so long as he remains in that notorious place, our initial aim is to get him transferred to a prison in the north of Iraq, where we can at least have a chance of visiting him.