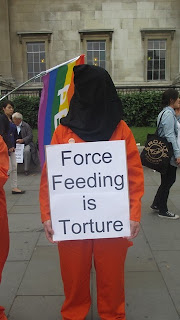 The Foreign Office has confirmed that the case of Shaker Aamer was raised by David Cameron with Barack Obama during the G8 conference. David Cameron has also written to Shaker Aamer’s daughter about her father’s plight. The Foreign Office has said that the government will continue to make representations on his behalf.
http://www.bbc.co.uk/news/uk-22960826

British resident Ahmed Belbacha, currently on hunger strike, told the BBC through his lawyers that force-feeding is painful and causes prisoners to vomit: http://www.bbc.co.uk/news/22973263

Guantánamo Bay:
The hunger strike is now in its fifth month. The US Defense Department has put the number of those on hunger strike at 104 with several dozen being force fed to keep them alive.
In response to a letter by 13 prisoners sent to the prison authorities at the end of last month asking to be examined by independent doctors, 150 doctors signed a letter in “The Lancet” demanding that they be given access to the prisoners so they can check and assess their health situation.
http://www.thelancet.com/journals/lancet/article/PIIS0140-6736%2813%2961414-2/fulltext
Medical doctors have also called on medical staff working at Guantánamo Bay not to comply with military orders which go against medical ethics; however, the force-feeding and other medical abuses of prisoners continue.

Pre-trial hearings resumed at Guantánamo Bay this month. In the case of Abd Al-Rahim Al Nashiri, a Yemeni citizen, accused of involvement in the bombing of US warships in the Gulf of Aden at the beginning of the 2000s, a medical assessment has established that he is suffering from depression and post-traumatic stress disorder (PTSD) but is otherwise fit to stand trial. http://www.miamiherald.com/2013/06/01/3428534/guantanamo-captive-accused-in.html His hearing resumed on 11 June, during which motions were considered on secret information held by the US authorities, including a motion about information that is so secret “that those who’ve read it can’t say what it’s about, and those who haven’t don’t have a clue.” The defence also sought to have information disclosed about the years he spent in secret illegal CIA prisons at various locations around the world where he was tortured. Arguments were also heard on whether he should be allowed to hear all of the evidence against him in person. In the end, he was excluded from part of the pre-trial hearing, although his lawyers were not.
http://www.miamiherald.com/2013/06/10/3444083/new-layer-of-secrecy-at-guantanamo.html

Charges have been brought against another Guantánamo prisoner, 52-year old Abd Al-Hadi Al-Iraqi, an Iraqi national and one of the 16 so-called “high-value” prisoners held there. He has been charged with perfidy, for allegedly coordinating suicide attacks on US interests in Afghanistan. The charges have to be reviewed and approved by the Pentagon and carry a maximum life sentence. He has been held at Guantánamo Bay since 2007: www.miamiherald.com/2013/06/10/3444080/charges-sought-for-iraqi-held.html

Secrecy issues have also dogged the pre-trial hearing of five men accused of involvement in the 9/11 attacks. Part of the secrecy involves the use of evidence obtained through the use of torture including waterboarding; one of the defendants, Khalid Sheikh Mohammed was waterboarded 183 times. Later, during the hearing, the courtroom was cleared after a defence lawyer claimed he had been threatened by the prosecution. Pre-trial hearings in both cases will resume later this year.
http://www.miamiherald.com/2013/06/20/3461476/judge-orders-abrupt-recess-at.html

Following promises to take action on Guantánamo Bay last month, Barack Obama has appointed a new special envoy to work on the closure of Guantánamo, Clifford Sloan, a senior lawyer with political experience in Washington. He will resume the work of the office to close Guantánamo within the State Department, which was closed down in late January, just days before the current hunger strike started.

Barack Obama’s administration has for the first time revealed the list of 48 prisoners it has listed for “indefinite detention” without charge or trial, who are unlikely to be released from Guantánamo as the US considers them to be too dangerous, too dangerous to even let them or the world know why. The list was disclosed following an application under the Freedom of Information Act. Two of the prisoners on the 2009 list have since died. Earlier this year, a senior lawyer for the US government denied that there was any indefinite detention of prisoners at Guantánamo Bay; in 2011, Barack Obama passed a law enacting the indefinite detention of prisoners at Guantánamo Bay.
http://rt.com/usa/gitmo-indefinite-detainees-identified-845/

Former Guantánamo prisoner Omar Khadr was sent to the Edmonton maximum-security prison at the end of May, after being transferred from the Milhaven Institution, also known as Canada’s “Guantánamo North”. Negotiations about the move took two months and during his stay at Milhaven, Omar Khadr spent all but three weeks in solitary confinement. His lawyer Dennis Edney has hailed the move as a positive step and hopes that he will have a chance to resume his education, which he was prevented from doing at Milhaven. http://www.edmontonjournal.com/news/edmonton/Omar+Khadr+been+transferred+Edmonton+Institution/8450166/story.html

A military report into the death of Yemeni prisoner Adnan Latif, found dead in his cell in September 2012, alleges that he died as a result of a drugs overdose and cites lapses, which remain unexplained, in prison security leading to his death. The 79-page report claims he hoarded pills for himself and died after ingesting 24 in one go. However, the US military has made sure it is impossible for an independent autopsy to be carried out and cause of death to be established.
http://www.nytimes.com/2013/06/29/us/politics/suicide-by-pills-is-cited-in-death-of-guantanamo-detainee.html

Extraordinary rendition:
Two American contractors in Iraq Donald Vance & Nathan Ertel, who claimed they had been tortured and held illegally by US soldiers in Iraq for several months for blowing the whistle on their employer, whom they claimed was gunrunning, lost their case against Donald Rumsfeld for torture. The pair brought an appeal before the US Supreme Court against the former Defense Secretary for the illegal actions of a subordinate; the ruling held that Rumsfeld “cannot be held liable for actions taken by subordinates that may have crossed legal bounds.” They argued that Rumsfeld had personally approved their detention and torture.
http://bostonherald.com/news_opinion/us_politics/2013/06/high_court_ends_torture_suit_against_rumsfeld

Amnesty International launched a new report this month cataloguing Poland’s involvement in the CIA’s extraordinary rendition programme and calling on the Polish authorities to hold a thorough examination http://www.amnesty.org/en/news/poland-reveal-truth-about-secret-cia-detention-site-2013-06-12 The report, entitled “Unlock the truth: Poland’s involvement in CIA secret detention,” states that “Secrecy and delay cannot be used as tactics to avoid accountability. The Polish government must come clean about a period in the country’s history when those in authority appear to have colluded with the USA and other states in the unlawful apprehension of people and their transfer to places where they were tortured and subjected to enforced disappearance. [...] The genie is out of the bottle – there is a stream of credible public reports by the media, intergovernmental, and non-governmental organizations – not to mention official data from Polish governmental agencies – that leaves little doubt that Poland hosted a secret detention site operated by the CIA. If there is enough evidence to lay charges against former officials and intelligence operatives for their participation in these illegal activities, those people should be prosecuted now.”
The two prisoners who have brought claims against the Polish government are Abd Al-Nashiri and Abu Zubaydah, both currently held at and facing prosecution at Guantánamo Bay. On the day the report was published, 12 June, a third prisoner, Saudi Walid Bin Al-Attash, joined their claim against Poland.

Lithuania assumes the rotating presidency of the European Union for 6 months on 1st July. Human Rights Watch (HRW) has taken the opportunity this presents to call on Lithuania to reopen its investigation into complicity in extraordinary rendition. After a positive start, with an investigation in 2010, this was closed a year later inconclusively. Last year, the European Parliament called on Lithuania to reopen its investigation too. Lithuania is alleged to have been involved in running a secret torture facility for the CIA and facilitating torture flights. Its involvement is considered to have taken place between 2001 and 2006. HRW said, “Lithuania is betraying the fundamental principles of human rights that underline the European Union by refusing to investigate serious allegations of human rights crimes, such as disappearances and torture. The country holding the EU’s presidency should have the courage and leadership to confront wrongdoing and make amends.”
http://www.hrw.org/news/2013/06/25/lithuania-reopen-investigation-secret-cia-prisons

LGC Activities:
The June LGC “Shut Down Guantánamo!” demonstration was attended by 10 people. At this demonstration, the LGC was joined by the family of Shawki Ahmed Omar, a Palestinian-American prisoner on hunger strike in an Iraqi jail where he has been held and tortured for the past 8 years. To learn more about his and their story, please read: http://onesmallwindow.wordpress.com/2013/06/13/starved-of-justice-in-iraq-american-prisoner-on-hunger-strike/
The next monthly demonstration coincides with US Independence and will thus be an open mic demonstration at which individuals and groups are invited to share their thoughts and raise awareness of issues of joint US/UK interest. This demonstration will be at 6-8pm on Thursday 4 July outside the US Embassy, Grosvenor Square, W1A https://www.facebook.com/events/638519959509082/

The LGC organised a rally in Trafalgar Square on 26 June to mark international day in support of victims of torture. The theme this year is the right to rehabilitation, of which justice is a key element. Around 60 people joined the LGC rally, and there was a very positive response by passers-by, many of whom did not know the significance of this date or about the hunger strike or continuing torture at Guantánamo Bay. The LGC rally was preceded by a rally by the UK Baluch community, a persecuted ethnic minority in Pakistan and Iran; this rally was supported by the LGC.
LGC report of this event:
http://londonguantanamocampaign.blogspot.co.uk/2013/06/international-day-in-support-of-victims.html
Other media:
http://www.demotix.com/news/2197524/london-marks-international-day-support-victims-torture#media-2197449
http://www.demotix.com/news/2197737/say-no-torture-protest-london
http://www.aljazeera.net/humanrights/pages/be2af4d5-3554-4fc1-b763-ccef9ef61e41  (Arabic)
http://www.demotix.com/news/2198642/protest-against-torture-held-trafalgar-square#media-2198367

On 28 June, UN Commissioner for Human Rights, Navi Pillay, answered questions on human rights on BBC World Services’ World Have Your Say programme. The LGC was invited to ask one question about Guantánamo Bay. Ms Pillay has been unequivocal in her condemnation of Guantánamo Bay and the hunger strike there. In response to a question by Aisha Maniar from the LGC concerning why the UN has not defined terrorism clearly, thereby allowing regimes such as that operated at Guantánamo to exist, Ms Pillay stated “I do take your point and I’m going to go and personally examine again how the United Nations has defined terrorism and compare that with national legal systems as well.” As stated by Aisha Maniar, a clear definition of terrorism would prevent arbitrary detention and arbitrary punishment as well as the impunity of states for their violations of human rights. http://www.youtube.com/watch?v=dMPvjai3yKM (from 25:00 onwards)

Posted by London Guantánamo Campaign at 10:13 AM