What are YOU Doing on 17-19 May? (Global Weekend of Action to Mark 100th Day of Guantánamo Hunger Strike)

Friday 17 May marks the 100th day of the current hunger strike at Guantánamo Bay. More than 130 of the 166 prisoners are involved. Several dozen are being force fed and more than 10 are close to death. While the prison officials have allowed the situation to continue for so long, there have been no attempts to remedy the problem or address the prisoners’ demands. 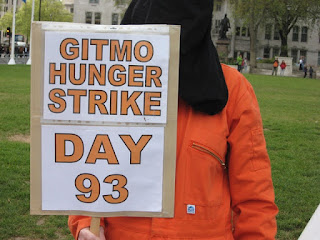 To mark this date, groups and individuals around the world will be taking part in a weekend of action, fasting and protest around the world. The London Guantánamo Campaign will be coordinating actions in London.

On Saturday 18 May, at 2-4pm, we will hold a solidarity demonstration outside the US Embassy, Grosvenor Square, London W1A (flyer below and here: https://www.facebook.com/events/113404248830109/). As part of this action, we will be creating a “murder scene” outside the Embassy to draw awareness to the potentially fatal consequences of the hunger strike and the US government’s responsibility for it. We also invite you to speak at our open mic and read out passages of statements by the hunger strikers published in the press which have made an impression on you. To get you started:
http://www.nytimes.com/2013/04/15/opinion/hunger-striking-at-guantanamo-bay.html
http://www.guardian.co.uk/world/2013/apr/21/shaker-aamer-guantanamo-bay
http://www.lawfareblog.com/wp-content/uploads/2013/03/839-Emergency-Motion.pdf
Please join us and bring your friends, family and banners. 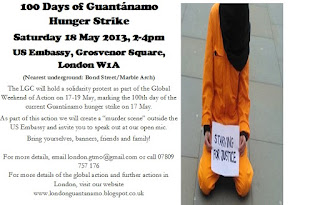 We are looking for volunteers to take part in the “murder scene”. No harm will come to volunteers, however you will be required to lie down (in orange jumpsuit and black hood provided by us) on the public walkway between the US Embassy and Grosvenor Square.

We are also planning other actions if we can get enough volunteers:
-         * A midnight candlelit vigil outside the US Embassy either on the night of Friday/morning of Saturday 17/18 May or the following day.

If you would like to volunteer or take part in these actions, please get in touch with us by e-mail at london.gtmo@gmail.com

As this is part of a global action, there are already various actions taking place and that you can get involved in:
-          Pledge to fast in support of the hunger strikers either on the three days of the 17-19 May, before or after. Over 1000 people already have: http://codepink.salsalabs.com/o/424/p/dia/action3/common/public/?action_KEY=7140
-          Add your name to the following petitions to close Guantánamo: https://www.change.org/petitions/president-obama-close-detention-facility-at-guantanamo-bay (almost 200,000 signatures already!)
http://signon.org/sign/i-support-closing-guantanamo?source=s.tw&r_by=7709456
http://activism.thenation.com/p/dia/action3/common/public/index.sjs?action_KEY=10664
-          Get involved in the Twitter storm: http://anoninsiders.net/opgtmo-press-release-1970/ Anonymous will be holding Twitter storms and various other online actions on 17-19 May. If you are on Twitter, please follow @OpGTMO and use the hashtags #closegitmo and #OpGTMO to get this weekend of action and awareness of the hunger strike trending https://www.youtube.com/watch?v=RsHSBD1-C78 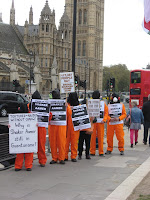 -          Join the Save Shaker Aamer Campaign rolling vigil in Parliament Square, every weekday from 12-3pm, from 9-21 May, the state opening of Parliament to get the British Parliament to take action to reunite British resident Shaker Aamer with his British family after 11 ½ years. He is on hunger strike and is currently being force fed. (See attached pictures)

-          Add your name and donate to the letter ad page in the New York Times, which will hopefully be published next week: http://www.worldcantwait.net/index.php/calls-to-action/8236-stop-the-torture-close-guantanamo-end-the-war-crimes-and-violations-of-fundamental-rights

Not in London? We are aware that actions will also be taking place in Yorkshire, Oxford, Glastonbury and Kingston on this weekend. Wherever you are on Planet Earth, organise something and be a part of this action. You can register your action here: http://org.salsalabs.com/o/1170/p/salsa/event/common/public/create.sjs?distributed_event_KEY=718 and check for local actions here: http://org.salsalabs.com/o/1170/p/salsa/event/common/public/index.sjs?distributed_event_KEY=718 If you are on Facebook, you can share them here as well: http://www.facebook.com/events/442435245849692/

11 years of imprisonment without charge or trial is 11 years too many. It’s time for Guantánamo Bay to close. Show your solidarity with the prisoners and their extreme hunger strike action. Make the difference that you want to see and then ask others, “what are you doing on 17-19 May?”

Please get in touch with us if you would like to volunteer or would like more details of actions planned in London: london.gtmo@gmail.com

Posted by London Guantánamo Campaign at 5:13 AM